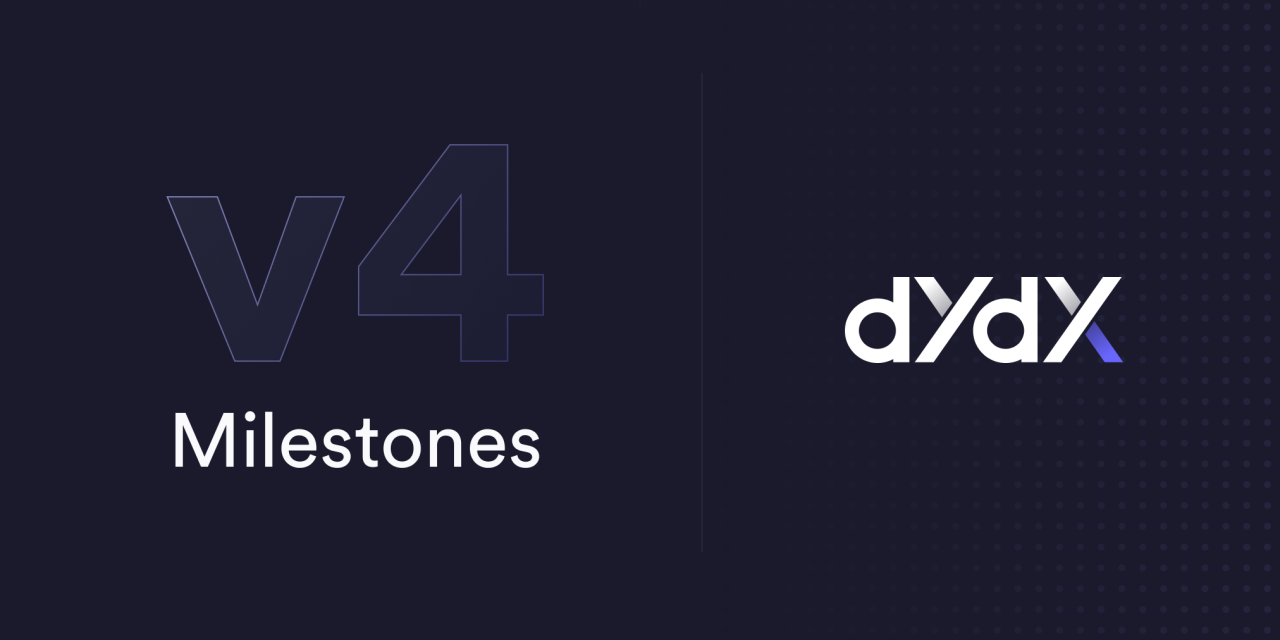 dYdX is committed to creating the best product and establishing the gold standard in DeFi. To that end, we will provide periodic updates on what we are planning for the rollout of the new dYdX V4 blockchain and solicit feedback and input at certain junctures.

We’ve split the development of the blockchain into several milestones so that we can test early-and-often, allowing us to validate our assumptions, find bottlenecks, fix bugs, and gather product feedback.

Each of our milestones contains a set of features to be built. Each milestone also specifies the release of a new network, or a significant evolution of an existing network. This serves to expand the scope and quality of integration testing that we will be able to perform.

During each milestone we will add a suite of automated unit and integration tests, as well as use telemetry to identify opportunities for optimization. We also plan to continuously build both a graphical front-end interface as well as an indexing service that can store and serve historical data more efficiently than a default full-node.

In addition, at the completion of each milestone, we plan to release a major update to the network. This means either launching a new network or making an existing network more stable or widely available.

Below we detail the major features to be built for each milestone as well as the associated network release.  As the project progresses, we may need to make adjustments to certain projected milestones, and will keep the community apprised.

This milestone was to allow for basic trading on the blockchain so that we could start testing as early as possible. The main features of this milestone were:

As part of this milestone, we have created an automated way to spin up a developer testnet consisting of multiple validator nodes across multiple continents that allows us to stress-test the system in a higher-latency environment.

This milestone is to complete all of the basic functionality needed for operating the exchange. The main features of this milestone are:

This milestone will also take the developer testnet and transform it into a more stable testnet with a larger number of validator nodes. This testnet will still remain internal to dYdX, but will allow for more robust testing by developers, including those building end-user products.

This milestone will see the creation of a private testnet that’s external to dYdX. We will work with a limited set of partners to ensure that the documentation and setup for running validator nodes and full nodes is as easy and fully-featured as possible.

If you are interested in participating as a validator in this testnet, please fill out this form.

This milestone is to build the rest of the functions that can be added on to a non-production chain and to test on a publicly available network. The main features of this milestone are:

This milestone will see the evolution of the private testnet into a public testnet that allows anyone to trade testnet tokens as well as run validators and full-nodes.

This milestone is for polish, optimizations, and to build any other necessary features for the launch of our mainnet. The main features of this milestone are:

This milestone will create a third network, the dYdX Mainnet, which will allow for the trading of Perpetual Futures.

Once mainnet is rolled out, we expect there to be three parallel networks:

This will allow for future testing of features and upgrades in real-world environments before they are deployed to mainnet.

As previously mentioned, we have fully completed Milestone 1 including stress testing our Developer Network and have achieved 500 order placements per second and 50 trades per second. We plan to continue to optimize this over future milestones.

We are now in the middle of working on Milestone 2, and will release another update after completion.

We’re extremely excited to continue building out the dYdX Chain and plan to release updates in the form of blog posts for each future milestone.

We also plan to release a Public FAQ Page in the near future. This page will be updated regularly with the most up-to-date information about what to expect. So far, we have had the most questions about running validators, governance, asset-listing, and the user-experience of onboarding. To ask additional questions, join the discussion on Discord, participate in the dYdX community, or follow our Twitter account.

If helping to build the future of decentralized exchange and open finance sounds like something you’d be interested in, check out our Values and our Open Roles!