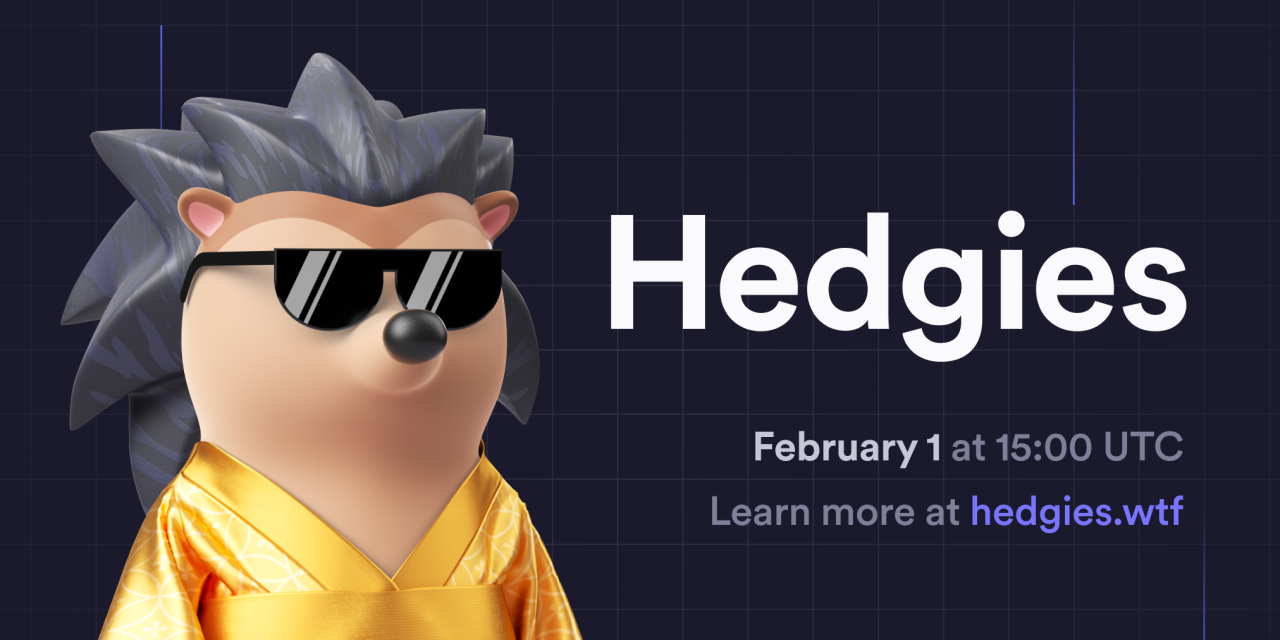 Introducing Hedgies, a collection of 4,200 unique, collectible avatars represented as NFTs on Ethereum which will be distributed to voters, traders, and the crypto community at large. We are excited for each one to find a home, and for Hedgies to grow & unite our incredible community.

All Hedgies in the initial distribution will be free to mint, serve as avatars for enthusiasts of dYdX and the trading community more generally. In addition, they will have utility on dYdX. Hedgies are filled with references to crypto and trading, and celebrate the unique culture of web3.

Minting Hedgies will only cost gas, and dYdX Trading Inc. will take no royalties from the collection. Only a 2.5% royalty on transactions will be sent directly to the talented independent artists of the project, Anna Kajda and Arek Kajda.

The Hedgies collection unlocks the next chapter for our community & brand. They will be awarded to champions of the market, and serve as the foundation of identity on the dYdX exchange, especially once Profiles launch.

Notwithstanding this summary, Hedgies will be subject to the Hedgies License Agreement, a license that gives rights as close as possible to full ownership of every aspect of Hedgies to Hedgie owners.

Hedgie ownership will be verified on the dYdX exchange under user profiles and will serve as identities to early traders and governance participants on the dYdX protocol. Additionally, each user holding a Hedgie will also receive a one tier increase in $DYDX fee tier discount on the dYdX protocol (for example, users who hold greater than or equal to 5,000 $DYDX will receive a 15% discount (in tier 4) rather than a normal 10% discount (in tier 3). dYdX Trading Inc. reserves the right to add additional utility to the Hedgies, and the discretion to change Hedgie utility.

Leftover Hedgies in any tier will roll over to the following tier (e.g., if five Hedgies go unminted in tier 2, those five Hedgies will be added to the total supply in tier 3). The tiers are as follows:

Once the first 2,443 Hedgies are minted, the necessary smart contract data for randomly distributing the Hedgies, can be deployed in an auditable manner. Then, dYdX Trading Inc. will upload the image metadata to IPFS and set it on the smart contract. The Hedgies will be revealed before the start of the ongoing distribution on February 8th at 3:00 PM UTC.

Once the 2,443 Hedgies from the initial distribution have been minted, the next 1,757 Hedgies will be distributed to Traders on the dYdX exchange over two years. The ongoing distribution of the Hedgies will also randomly distribute via an auditable distribution method, with a seed of randomness being the blockhash of the first block following the start of a competition.

dYdX Trading Inc. will custody a permissioned key that has the ability to mint Hedgies to any address up to the total supply of 4,200 Hedgies on a predefined schedule. This can only be used after the initial distribution has finished and will be used for distributing Hedgies to the daily and weekly competition winners.

dYdX will distribute an additional 10 Hedgies each week, starting on Tuesday, February 8, at 15:00 UTC, for 104 weeks. At the beginning of every week, or “season”, ten Hedgies will be revealed on hedgies.wtf and trade.dydx.exchange, to be competed for during the following week.

For the first two weeks, there will be less than 10 distributed, given that all Leagues will not be populated.  After each week has ended, the revealed Hedgies will be distributed at random to the weekly competition winners within 30 days.

The top four performers in the Diamond league, top three in the Platinum league, top two in the Gold league, and top trader in the Silver league will each earn a Hedgie, based on the results of the weekly competition.

We owe a special thanks to Anna Kajda and Arek Kajda, without whom this project could not have been possible. For their contributions to illustration, character design, modeling & rendering, and more, Anna and Arek will be entitled to 2.5% of royalties on secondary sales of Hedgies. If you are a fan of the artwork, please follow them on Twitter, and share your love.

Follow @HedgiesOfficial on Twitter to stay in touch with latest updates, and bookmark hedgies.wtf ahead of the start of minting! Once revealed, you can view the collection on OpenSea. We hope you join the community!